Elite Therapy Center’s occupational and physical therapy is provided through Elite Therapy Services. Pediatric occupational therapy provides skilled treatment for infants and children who need special  help developing or regaining functional skills such as self-care and activity of daily living (ADL) skills, feeding and oral-motor difficulties, play and social skills. We offer encouragement and celebrate in each client’s success. Remember: Early detection and intervention are key. If you have any concerns, please contact us. 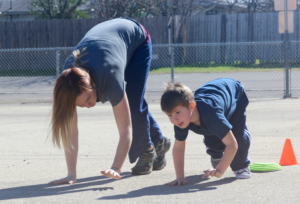 The occupational therapist addresses the treatment and management of infants, children, and adolescents with a variety of congenital, developmental, neuromuscular, skeletal, or acquired disorders/diseases and provides individualized assessment and often early detection of physical challenges. Treatments are play-based and are unique to the developmental level of each child.

As with most problems in life, the sooner they are detected and addressed, the higher the success rate. This is especially true for children with special needs. We can help you address a functional difficulty before it causes a reduction in functional abilities, low self-esteem, poor school performance, or strained peer and family relationships.

Sensory Processing Disorder or SPD (originally called Sensory Integration Dysfunction) is a neurological disorder in which the sensory information that the individual perceives results in abnormal responses.  A more formal definition is: SPD is a neurophysiologic condition in which sensory input either from the environment or from one’s body is poorly detected, modulated, or interpreted and/or to which atypical responses are observed. Pioneering occupational therapist, psychologist, and neuroscientist A. Jean Ayres, Ph.D., likened SPD to a neurological “traffic jam” that prevents certain parts of the brain from receiving the information needed to interpret sensory information correctly. Information from: http://www.spdfoundation.net/about-sensory-processing-disorder/symptoms/

THANK YOU FOR YOUR VOTES!
Elite Therapy Center is a winner in ALL THREE CATEGORIES! In Waco, Elite Therapy Center was selected #1 in Pediatric Speech and Occupational Therapy and top three Physical Therapy!Check out LocalsLoveUs
We love serving local in Temple and at our additional locations in Gatesville, West, Waco, and Killeen. See our amazing Temple Clinic located right off I-35 and Midway Drive. Temple/Belton